The foundation of the BRICS Council of Exercise and Sports Science (BRICSCESS) is the outcome of an idea first conceived during the 18th International Scientific Congress “Olympic Sport and Sport for All” held 1-4 October, 2014 at Kazakh Academy of Sport and Tourism, Kazakhstan. BRICS stands for Brazil, Russia, India, China and South Africa.

As a result of that meeting it was decided that a scientific, board and general meeting would be held biennially with the BRICS Conference on Exercise and Sports Science. Dr. Ming-kai Chin, accepted to be the Acting President in order to set up the organization and to prepare the 2015 Founding Meeting at the 7th Asia Pacific Conference on Exercise and Sports Science (APCESS 2015) at Manav Rachna International University, India 17 Oct 2015. The draft constitution of BRICSCESS was finally adopted during the Founding Meeting attended by the five Founders and Board of Directors including Dr. Nara Oliveira (Brazil), Dr. Segey Litvinov (Russia), Dr. Ashok Kumar (India), Dr. Shihui Chen (China) & Dr. Maya van Gent (South Africa). Dr. Ming-kai Chin is elected as the Founding President and Dr. Hans de Ridder is elected as the Vice President for Africa and the Secretary General/Treasurer with the HQ stationed at the North-West University in Potchefstroom, South Africa. 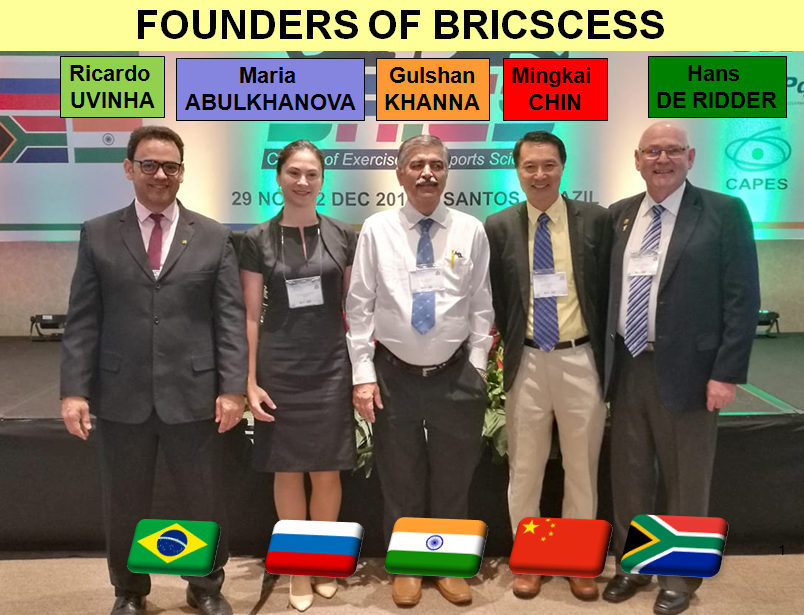